Most duct supports generate some type of stress concentrations, which may cause localized micro-cracking, localized crazing, or other types of defects. For exterior duct, in addition to dead loads, both seismic and wind loads may be imposed on the duct system. Other specialized loads may also affect the design of the duct and its support system such as thermal expansion or contraction, loads from equipment suspended from the duct, large valves, and other unique loads that may be imposed on the duct and the duct support systems.

The support systems for ducting may provide restraint in any one of three directions against both displacement and/or rotation. Careful consideration must be given when restraining duct to avoid the development of excessive internal duct stresses such as possible expansion or contraction due to temperature variations. The duct support systems should eliminate or minimize the development of such internal duct stresses by choosing appropriate degrees of restraint.

The type of hanger should be specified by the design engineer for the facility. However, in all cases, there must be a minimum of 180 degree saddle support on the bottom half of the duct. The duct should never be allowed to be supported on flat surfaces, such as in the diagram below:

Never allow the duct to rest directly on Uni-strut or any other narrow flat surface. (The duct tends to warp over time if it is only supported on one small point.) 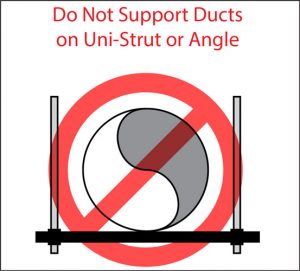 NOTE: DO NOT OVERTIGHTEN SUPPORT BANDS, STRAPS OR U-BOLTS THAT MAY CRUSH OR BIND THE DUCTWORK.

The following types of support styles are recommended for supporting ATS FXP™ ductwork:

Following the support type details are the tables for support spans and band/strap widths.